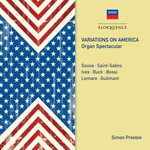 An original album from the last days of the Argo label, and a spectacular display of virtuosity in both composition and performance.

Simon Preston had been a recording artist for almost three decades when, in March 1988, he recorded this collection at the organ of the Methuen Memorial Music Hall in Boston. The instrument itself is a noted example of organ-building in the Romantic German school, commissioned from the firm of E.F Walcker by the president of the Boston Music Hall Association, Jabez Baxter Upham. The organ was later moved - to a purpose-built hall - and significantly restored by the Aeolian-Skinner company. It is still a demonstration-quality instrument: shimmering strings, sparkling mixtures and brilliant reeds provide seemingly endless resources for the interpretation of all periods and styles of the organ repertoire.

Preston's program on the present album is seemingly designed to put such an organ through its paces. The most substantial work is the First Organ Sonata by Guilmant, which is celebrated for its barnstorming finale. However, there are fireworks aplenty from Ives, Lemare and Sousa, in works which draw on almost every colouristic possibility from a well-equipped organ, and with an almost riotous abandon. The Last Rose of Summer variations form a fine tribute to the instrument's first appointed organist, Dudley Buck, whose duties included three hour-long recitals each week.

'The marvellous Walcker/Aeolian-Skinner organ of the great Memorial Music Hall in Methuen, Massachusetts projects itself with eminence and verve and is, once again, seized in splendidly balanced sound on disc … Preston's admirers will also recognize the blue-blooded reverence for style and architectural shaping of the substantial works he programs. The Saint-Saëns and Bossi works, in particular, draw praise for Preston's immaculate and ardent performance.' Fanfare, May/June 1991

"Charles Ives' very different set of Variations lends its name to the disc. These teenage experiments are splendidly performed and recorded; they emerge excitingly from the speakers; goodness knows how his 1890s audience would have reacted !

The disc can be warmly recommended to those who wish to hear this superb instrument, faithfully caught by the engineers in its natural context. It also offers a snapshot of Simon Preston's considerable artistry in lighter fare. It is thus a desirable appendix to the other Preston discs (of arguably meatier repertoire) Eloquence have recently reissued to celebrate his 80th birthday in 2018." MusicWeb Jan 2018