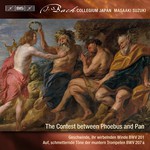 Most of Johannes Sebastian Bach's secular cantatas were written for specific political, academic or private festive occasions. In the case of Geschwinde, ihr wirbelnden Winde, BWV 201, however, it may well be that Bach composed it for his own sake: the message conveyed in the work can be interpreted as a defence of Bach's own artistry and musical attitudes against the trend of the time towards easier fare. Subtitling the cantata 'dramma per musica', Bach sets an episode from Greek mythology in which Phoebus (Apollo) and Pan enter into a musical contest. Phoebus, the god of the arts, presents a beautifully balanced and technically accomplished aria, while Pan sings a rustic dance tune. The judges offer Phoebus the prize, but the verdict isn't unanimous - King Midas prefers Pan's catchy ditty, for which Phoebus punishes him by giving him donkey ears. On this amply-filled disc Bach's praise of high art is followed by another tribute, now to Augustus III, Elector of Saxony and King of Poland. It is likely that Augustus never knew that the same music had been used 10 years earlier to congratulate a Leipzig academic on his promotion: Auf, schmetternde Töne… BWV 207a is based almost entirely on Vereinigte Zwietracht der wechselnden Saiten, BWV 207. But Bach was something of the recycler's recycler, and already BWV 207 included music from the First Brandenburg Concerto, with a choir added to the forces, and trumpets and timpani replacing the horns.