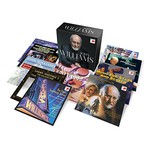 In 1980, composer John Williams became one of the most visible conductors on the planet after being named Music Director of the Boston Pops Orchestra. Since then he has lead hundreds of high-profile concerts with the Pops and with many other leading orchestras around the world. He has been composing and conducting music for more than six decades.

This set contains 20 Complete albums featuring music from films and Broadway standards of the great American songbook, the Olympic Games and Christmas classics.

Features Main Theme (From 'star Wars'), Title Theme from 'Jaws', 'I Dreamed a Dream' from Les Miserables, The Trolley Song from 'Meet Me in St Louis', The Color Purple: Main Title, John Williams's own 'Concerto for Cello & Orchestra' and much much more

"...This disc contains arrangements of film scores for violin and orchestra. Perlman's playing is lovely, as always; the arrangements are pleasant and well played..." American Record Guide on Cinema Serenade