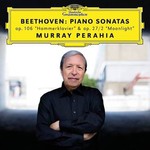 Murray Perahia, a living legend of piano, records two benchmark sonatas by Beethoven for the first time in his storied career. After years of study of original manuscripts, working sketches and editions published during the composer's lifetime, and having edited the new Henle Urtext edition of the complete Beethoven piano sonatas, Perahia now presents two of Beethoven's most famous sonatas as a revelation.

"The pulse of the Scherzo is rigorously even, but it has explosive energy; the sheer precisions of the articulation in the finale is a pleasure, as he takes us boldly through its labyrinth of furiously contending ideas…Perahia's account of the Moonlight Sonata is no less exemplary. He brings out the grave poetry of the Adagio, presents a relaxed and conversational Allegretto, and the finale has charm, rather than the facetious excitement with which many pianists imbue it." BBC Music Five Stars

"Perahia is artist enough to know that great art is never, of itself, ugly. It may be Beethoven's instinct to push every component of the dauntingly complex contrapuntal finale [of the Hammerklavier] to its logical conclusion (and beyond) but Perahia, though honouring the intent, declines to turn the music into a rout. In matters of musical diction, lucidity matters." Gramophone recording of the Month March 2018

"The result of Perahia's study is utterly compelling. Tempi are fast throughout: overall Perahia takes 41 minutes. The impetus caught me by surprise at first, but as Perahia states in the booklet interview with Jessica Duchen, the 'first movement comes out like a comet'. Perahia's tempi and pacing come from the music. The brief Scherzo is delightfully throwaway, a smile before the descent into the depths of the Adagio sostenuto, which Perahia shapes like one huge paragraph. Here, Perahia shows himself to be an outstanding Beethovenian, and his navigation through the final Allegro risoluto is outstanding. Every phrase is perfectly articulated, and at such speed, too. [Moonlight Sonata] It provides huge contrast and Perahia produces a beautifully shaped and absorbing performance. With great, naturally clear sound from DG, this recording deserves to go straight to the top of the Classical Charts" International Piano