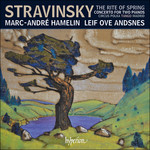 Shortly before its notorious Paris ballet premiere in 1913, this was essentially how 'The Rite of Spring' first saw the light of day: Leif Ove Andsnes and Marc-André Hamelin recapture the heady, visceral thrill which must have been in the air when Stravinsky sat down at the piano with Debussy to create this landmark of modernism.

"Andsnes and Hamelin also play the Concerto for Two Pianos, a substantial Stravinsky score and one well worth getting to know. Here is every side of Stravinsky's persona, not just the cool neo-classicism of the period when he wrote it, but flashes of the fantasy of The Firebird and the violence of The Rite of Spring. Together with three colourful, short Stravinsky arrangements the programme adds up to a brilliant album." Financial Times

"Hamelin and Andsnes are irresistibly clear and energetic...For sheer articulacy, synchronised gymnastics, flawless balance, range of colour and flinty attack, or any other criterion you care to reach for, this is breathtaking pianism...An immensely collectable album: a strong candidate for Disc of the Year, never mind of the Month." Gramophone Record of the Month Feb 2018

"Soulima Stravinsky's two-piano take on Madrid, originally written for the pianola, is dispatched with rhythmic flair and a sure sense of style. It's an alluring little number that would make a perfect encore. This recording is well up to the high standards we've come to expect from Hyperion." MusicWeb

"These superb virtuosos coalesce in triumph on triumph of phrasing and crisp articulation. Their two-piano reading of The Rite of Spring adds to the inescapable savage exhilaration of the ballet a note-by-note precision and an almost neoclassical sense of the objectivity of the construction...a disc of scintillating pleasures." Sunday Times

"I suspect that had these pianists performed these two works live in an hour-long recital the audience would have demanded encores; refusal to comply would almost certainly have precipitated scenes comparable with those seen at the Théâtre des Champs-Elysées back in 1913." Recording of the Month MusicWeb April 2018