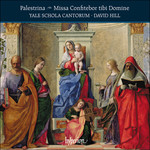 The music on this recording represents the repertory performed at St Peter's, or in other Roman churches, in the late 1570s or 1580s, during the celebration of Mass and Vespers on a patronal feast day. On such occasions extra singers (if necessary) and instrumentalists were brought in to attract and impress crowds of people and to fill the large central spaces of the new early-baroque churches then being erected throughout the city. Much of this music displays the more richly sonorous and proto-baroque side of Palestrina's style, often overlooked due to his received image as a relatively austere composer with a particular skill in counterpoint. As we can hear, that skill was certainly there, but so too was a marvellous ear for musical architecture and a strong commitment to matching the music to the text.