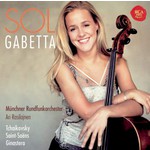 It's ironic that this disc is so glamorously packaged - with numerous pictures of the young Franco-Russian, Argentinian-born Sol Gabetta - that you'd be forgiven for thinking it was just another marketing-led release. But don't let that put you off: this cellist is anything but a dizzy blonde.

She chooses two of the pinnacles of the romantic repertoire - Saint-Saëns's First Concerto and Tchaikovsky's Rococo Variations. But she need not fear comparison: from the moment she makes her first entry in the Rococo, she seizes attention through the remarkable vocal quality of her sound. If, in the Allegro moderato variation, Rostropovich makes those stratospheric trills even more ethereal, and his cadenza plays with silence more dramatically, Gabetta is irresistible in the Andante variation which follows. She puts the beauty of her sound to good use in Tchaikovsky's hushed Andante cantabile too. In the Pezzo capriccioso she gets a real chamber-musical feel, while the faster section zips along with delightful élan.

Saint-Saëns's First Concerto is now such a cornerstone of the repertoire that it's easy to forget it wasn't an immediate hit. The competition here is very strong, from Jacqueline du Pré's ecstatically drawn lines to Steven Isserlis's dancing vision. Han-Na Chang, in her debut recording, sounds more tentative expressively, but then she was hardly into her teens at the time. But Gabetta need fear no one, her gloriously poetic tone once again used to great effect, particularly in the middle movement (marked Allegretto, pace du Pré's extremely drawn-out reading). If, in the last resort, I marginally prefer Isserlis's approach, it's a question of taste rather than talent. To close, Gabetta chooses Ginastera's Pampeana No 2, as acerbic as a freshly squeezed lemon after all the lush beauty that has gone before. (Gramophone)