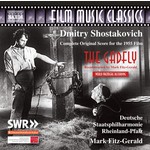 Set in mid-nineteenth-century Italy during a turbulent period of pre-Unification political unrest, The Gadfly drew from Shostakovich one of his most dazzling and popular film scores, heard hitherto on record only in a suite arranged and reorchestrated by Levon Atovmian. This recording presents the full, original score for the first time, as closely as possible to shostakovich's original conception. Reconstructed by Mark Fitz-Gerald from the original manuscript and the Russian film soundtrack, it calls for a large orchestra including church bells, an organ, two guitars and a mandolin, all excluded from the Atovmian suite. The excerpts from The Counterplan, which marked the fifteenth anniversary of the 1917 Revolution, include the infectious hit-tune The Song of the Counterplan.

"Having recorded vibrant accounts of meticulously restored film scores by Shostakovich, such as New Babylon and Alone, Mark Fitz-Gerald now reaches one of the most familiar by that composer…[The Gadfly] is here restored to the more subtle and varied colours of Shostakovich's original orchestration." BBC Music

"This is a real novelty, celebrating Shostakovich's life-long devotion to writing film music...The full, eclectic soundtrack [of The Gadfly] has now been reconstructed, with a fantastic display of serious scholarship, passion and practical musicianship by Mark Fitz-Gerald...A lively curiosity, to be sure." The Guardian

"Shostakovich turned some of the material into a short suite, but only now, thanks to great work by Mark Fitz-Gerald, all 29 sections have been recorded by the Deutsche Staatsphilharmonie Rheinland-Pfalz under Fitz-Gerald's baton. ..Even if Shostakovich privately felt it was small beer, his know-how as a craftsman and a colourist is to the fore." The Times