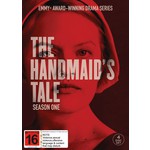 Based on the best-selling novel by Margaret Atwood, this series is set in Gilead, a totalitarian society in what used to be part of the United States. Gilead is ruled by a fundamentalist regime that treats women as property of the state, and is faced with environmental disasters and a plummeting birth rate. In a desperate attempt to repopulate a devastated world, the few remaining fertile women are forced into sexual servitude. One of these women, Offred, is determined to survive the terrifying world she lives in, and find the daughter that was taken from her.

"It is a brilliant adaptation - some changes, but loyal in what it says and what it asks. Atwood clearly approves: not only was she a consulting producer, but she's in it, a Red Centre cameo as a slapping Aunt. And it's brilliant television; I doubt there will be anything better this year. Resonant now, yes, but it will go on being so, ringing in your ears, and your head." - The Guardian

"It is unflinching, vital and scary as hell." - New York Times