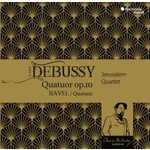 A century after his death on 25 March 1918, many Harmonia Mundi artists have paid tribute to Claude Debussy, the magician of melody and timbre, the great 'colourist' and father of modern music. The musicians of the Jerusalem Quartet offer a new reading of his only String Quartet, in the logical coupling with its Ravelian counterpart: in some respects, the two works might seem like twins - and yet what differences there are between them!

"This CD is a fine homage to Debussy, it being the centenary year of his death in 1918. It is apparent that the Jerusalem String Quartet is one of the best ensembles today. They play both of these French masterpieces magnificently. Also to note is the clear balanced recording and fine production (beautifully packaged in art nouveau design). This is a good sign of more to come - Harmonia Mundi has a series of new Debussy releases and re-issues in 2018. Highly recommended." Nicholas Butler/Marbecks

"It's a strikingly intense performance, grand in scale, emotionally heated and dark in tone…the richness and weight of the Jerusalem Quartet's sound spreads a pall of sensuality over the whole work, and the sweep and urgency of the phrasing create a heady immediacy throughout…It's a fine performance, beautifully articulated and superbly played, but ultimately it's the Debussy that is the disc's raison d'être. It's quite remarkable: do listen to it." Gramophone

"This disc is well worth investing in for the recording of the Ravel alone but add in the very fine recording of the Debussy and this disc is very attractive indeed. The playing of the Jerusalem Quartet is crystal clear throughout, no doubt helped by the acoustic and the excellent recorded sound, and this helps to bring out the very best of this music. The disc is presented, as with all discs in this new series of Debussy discs, in a cardboard sleeve inside a clamshell box along with a booklet containing useful and informative booklet notes." MusicWeb

"In advance, I wondered whether there was anything new to be said about these two incessantly recorded works. Happily the answer is 'yes'. Nor is it due to anything imposed - the novelty comes quite simply from doing what it says on the tin. This disc is a superb combination of intelligence, honesty, taste and technique." BBC Music Chamber Choice Sept 2018