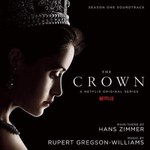 The album features the show's main title theme composed by Hans Zimmer (The Dark Knight, Inception, The Lion King, Rain Man, Pirates of the Caribbean), as well as the drama's original music composed by Rupert Gregson-Williams (The Legend of Tarzan, Hacksaw Ridge, Over the Hedge, Bee Movie).

The Crown is created by Peter Morgan (The Queen, Rush) and stars Claire Foy, Matt Smith, Vanessa Kirby and John Lithgow. The series is based on Morgan's play The Audience and centers on the interplay and political intrigue between Queen Elizabeth II and the British prime ministers spanning several decades.