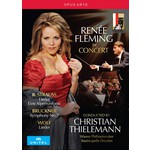 Two unforgettable evenings showcase the artistry of Renée Fleming alongside Christian Thielemann's mastery of the Austro-German Romantic idiom. The Salzburg Festival honours one of its founding fathers, Richard Strauss, and the Staatskapelle Dresden draws on the deep well of its living Bruckner tradition. The mixed vocal and symphonic programmes feature five lieder by the prolific songsmith Hugo Wolf in addition to four of Strauss's finest, and an opera scene featuring Fleming in one of her career-defining roles, Arabella. At Dresden's Semperoper, the Staatskapelle's then newly appointed music director leads them in Bruckner's lyric Seventh in which the composer mourns the death of Wagner, whereas in Salzburg, Thielemann helms the Vienna Philharmonic Orchestra for the spectacular mountain journey of Strauss's titanic Alpine Symphony.

"This is a rare case of visuals enhancing the listening experience, and the Vienna Philharmonic's Strauss tradition is there for all to see. Thielemann doesn't push or pull the music, but he is not a pretty sight: his left hand remains inexpressive...there is still no soprano I would rather hear in the soaring lines of "Traum durch die Dämmerung" and "Gesang der Apollopriesterin"." (Financial Times)

"You can immediately hear the classiness of the orchestral support...Thielemann's journey up the mountain is more a question of inner feeling than outward tone-painting...But the summit sequence and the epilogue rival Herbert von Karajan's Berlin Philharmonic for tonal opulence...the cameras always know what to pinpoint in order to highlight visually Strauss's most ingenious orchestral passages." (BBC Music DVD Choice - August 2012)

"Thielemann, whose reading is satisfyingly spacious, reveals the work's structural mastery in intermingling and transforming its many themes. The excellent video director Michael Beyer expertly lays out the orchestra in front of us, following the music sensibly so that we can relish Strauss's detailed scoring...[Fleming] sings gloriously and the result is ravishing" (Gramophone)

"it is more fun to actually see the players (kudos to video director Michael Beyer) than merely to listen...And no one will accuse the reading [of Ein Alpensinfonie] of not being exciting and the playing superb...In all, this is clearly a treat for Straussians and Fleming fans; she has been both better and worse, but overall, she's lovely here." (International Record Review)

"Thielemann's interpretation of Bruckner's Seventh Symphony is majestic and clean, as expected, though it falls just short of the cumulative power that the audience's warm reception suggests. The camera's close scrutiny underlines how minimal his conducting can be."
(BBC Music)

Bruckner:
Symphony No 7 in E