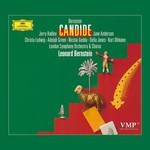 In 1953, the renowned playwright Lillian Hellman proposed to Leonard Bernstein that they adapt Voltaire's Candide for the musical theater. Voltaire's 1758 novella satirized the fashionable philosophies of his day and, especially, the Catholic Church whose Inquisition routinely tortured and killed "heretics" in a ghastly event known as an "Auto da Fé" ("act of faith"). Hellman observed a sinister parallel between the Inquisition's church-sponsored purges and the "Washington Witch Trials," fueled by anti-Communist hysteria and waged by the House Un-American Activities Committee. Charged with rage and indignition, she began her adaptation of Voltaire's with lyricist John LaTouche and Bernstein, who wrote numerous musical sketches. Before long, LaTouche was replaced by poet Richard Wilbur. Hellman, Bernstein, and Wilbur worked periodically over the next two years but labored in earnest through 1956, a year when Bernstein was simultaneously composing West Side Story. By October 1956, Candide was ready for performances in Boston, where Dorothy Parker contributed lyrics to "The Venice Gavotte" while Bernstein and Hellman had also added lyrics of their own to other numbers. The lyricist credits were already beginning to mount up.

Although the theme of political aggression originally attracted Lillian Hellman to the project, her sharpest writing on the topic was ironically jettisoned while the show was still out of town. The director, Tyrone Guthrie, became too nervous about her "Auto da Fé" scene specifically, as it directly satirized the House Un-American Activities Committee. It would appear that the urgent political impetus for writing the musical was the one aspect of the work that didn't stand up to the test of time. The original Broadway production, with sets by Oliver Smith and costumes by Irene Sharaff, opened at the Martin Beck Theater in New York on December 1, 1956 to mixed reviews and closed on February 2, 1957. Fortunately, the original cast album was recorded by Columbia Records, so the music thrived. The recording sold well, and Bernstein's score gained a sort of cult status.

With many additions and revisions the current recorded version of Candide was presented by the London Symphony Orchestra in concert at the Barbican Centre, London, England, in December, 1989, and was recorded by Deutsche Grammophon and taped
by Video Music Productions. Leonard Bernstein and John Wells created a narration, performed at the time by Adolph Green, that moved the action swiftly from one musical number to the next.

"As for the cast, Jerry Hadley is an ideal Candide (what a good career as a Broadway lead he might have had in another era), June Anderson is a grand opera Cunegonde with high wattage power, more perhaps on the "glitter" side and maybe not quite so "gay," but with flawless diction, unusual in a high-voiced diva, and plenty of personality. If Anderson is not on the level of creator Barbara Cook (no one is) or the effervescent Kristin Chenoweth in the New York Philharmonic staged concert DVD (also recommended), she's nonetheless a pleasure in this challenging role. The legendary and colorful Adolph Green, Bernstein's lyricist collaborator for On the Town and Wonderful Town , is a delight as Dr. Pangloss. And we get Christa Ludwig, Nicolai Gedda, and Della Jones, to boot! The playing of the London Symphony is first-rate, far better than what you'd get from a Broadway pit orchestra. The filming is expert, the sound superb. The bottom line: you have to have this DVD. No arguments, please, for this is indisputably the "best of all possible worlds." " ArkivMusic.com