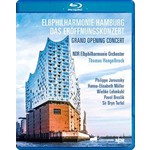 The Elbphilharmonie, the 'hall of wonders' (The Guardian), is undoubtedly the new landmark of Hamburg, a monumental synthesis of breath-taking architecture, a unique location and a world-class concert hall. In varying instrumentations the NDR Elbphilharmonie Orchestra, under the baton of Principal Conductor Thomas Hengelbrock, and several top-class soloists explore the possibilities of the Elbphilharmonie's Grand Hall and its acoustics with an exciting programme that spans across all musical eras, from the Renaissance to the present. It culminates in a brand-new commissioned work, created especially for this occasion by the most important living German composer, Wolfgang Rihm. 'A striking building, a scintillating concert!' (The New York Times).

BONUS: This documentary accompanies the formation process of this grand building, from the first sketch plans to the rehearsals before it's festive inauguration and includes statements by the architects Pierre de Meuron and Jacques Herzog, the acoustician Yasuhisa Toyota, Christoph Lieben-Seutter, Thomas Hengelbrock and more.

"There are plenty of musical highlights - oboist Kalev Kuljus's exquisite 'Pan', from Britten's Six Metamorphoses after Ovid; a lithe, light-textured finale from Messiaen's Turangalila Symphony; and the rumbling, inflammable Photopsosis of Bernd Alois Zimmerman…All told, this video is a tantalising advertisement for the new venue, and puts it high on my bucket-list of places to visit." (BBC Music)

"An unequivocal success is the way the drama of the leaps between the centuries remains absolutely undiluted...[the techincolour light displays] look phenomenal, and are well worth stretching to the Blu-ray for...As a concert recording this may not represent absolute as-it-was perfection but as a package with the documentary, and as a record of an extraordinary musical event, it comes highly recommended." Gramophone Blu-ray of the Month Sept 2017

Zimmermann, B A: Photoptosis - Prelude for large orchestra