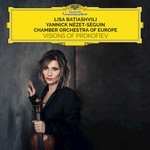 After the outstanding critical acclaim of her previous album of Tchaikovsky & Sibelius Violin Concertos with Staatskapelle Berlin and Daniel Barenboim, Lisa Batiashvili presents a masterful version of Prokofiev's two violin concertos, in another first-class musical partnership, with Chamber Orchestra of Europe and Yannick Nézet-Séguin. With her unique talent to turn standard repertoire into something new, fresh, elegant and special, this album will allow the listener to rediscover Prokofiev through Lisa's eyes. Set for release on 2 February 2018, the album features the core classic Prokofiev (violin concertos), as well as selected movements of his famous ballets with their very recognizable tunes (Cinderella, Romeo and Juliet, The Love for Three Oranges), newly arranged for Solo Violin and Orchestra by Tamás Batiashvili, Lisa's father.

"Nézet-Séguin cues a fine-spun accompaniment at the start and close of No. 1. Whereas he, the COR and Batiashvili collude for a carping attack at the centre of the Scherzo…She perfectly captures the music's sardonic spirit without overdoing the aggression. I also appreciate her free-flowing way with the solo opening of the Second Concerto, her subtle use of portamento and the sweetness of the first movement's second subject." Gramophone

"Everything's perfectly judged: the scherzo [of the First Concerto] whizzes past, and the finale's ticking clock has the right amount of dry wit. The end is a treat, Batiashvili and Nézet-Seguin disappearing into the ether, arm in arm…These are technically immaculate, thoughtful performances, handsomely recorded" The Arts Desk

"this is a disc that contains excellent Prokofiev performances. Lisa Batiashvili consistently drew me in to the music and the support she gets from the Chamber Orchestra of Europe and Yannick Nézet-Séguin is outstanding. The DG engineers have done the musicians proud by capturing the performances in excellent sound. The soloist is given just the right degree of prominence but not to such an extent as to impede one's appreciation of the fine orchestral contribution." MusicWeb