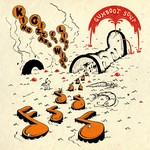 "A title like Gumboot Soup might suggest a sloppy collection of leftovers, but the record features some of the most delicately rendered songs ever released by this bull-in-a-china-shop band." - Pitchfork

A1. Beginner's Luck
A2. Greenhouse Heat Death
A3. Barefoot Desert
A4. Muddy Water
A5. Superposition
A6. Down The Sink
B1. The Great Chain of Being
B2. The Last Oasis
B3. All Is Known
B4. I'm Sleepin' In
B5. The Wheel