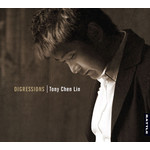 Life seems to be an endless stream of unforeseen digressions; it is often difficult to distinguish them - when they occur, what they depart from, where they lead to. Seen in this light, the realisation of a debut album has certainly been a happy and fortuitous digression in my life, and I am thrilled to present it here on Rattle.

The programme consists of three seemingly unrelated works presented in an order that exploits their contrasts to the fullest, suggesting a "narrative" in which each work digresses from a "main subject" to which we may or may not return. In lieu of the token classical sonata that often opens a concert, I jump in with Bartók's utterly unapologetic Piano Sonata, a unique work deeply rooted in Baroque and Classical traditions - yes, as dissonant as it may sound! I conclude the recital with Schumann's mercurial Humoreske, a work that exemplifies his polyphonic tendencies in forming ideas. In this respect, both works point to Bach (as great music often does) who occupies centre stage in the programme.

Squeezed in among these giants is my composition, which is partly inspired by the digressive nature of Schumann's piano music, and partly from digressive - or rather, distracted - moments while studying the Humoreske. Thus, motifs from Schumann's work surreptitiously find their way in. In concert I often serve it as an hors d'œuvre of sorts to segue into the tender opening of the Humoreske, cheekily bypassing the difficulty of beginning a work that seemingly does not begin ... but I digress.

My thanks first and foremost go to Prof. Jack C. Richards, without whose generosity and support this project would only have remained a dream. I would also like to thank producer Kenneth Young for his sharp, discerning ear and for pushing me to perform at my best, and engineer Steve Garden, with all the magical powers he seems to possess. I am forever indebted to my wonderful mentors who have been an endless source of inspiration over the years: Rosemary Stott, Edith Fischer, Jorge Pepi-Alos, Balázs Szokolay, Andreas Immer and Neville Baird.

I dedicate this album to my parents, who support me in every way yet beckon me back whenever I digress too far, and to my friends, but above all to my audience. My heartfelt thanks goes to you all for your unwavering support, and for continuing to remind me at crucial moments that what I do actually matters.

New Zealand pianist Tony Chen Lin's first encounter with music came at the age of 12 with keyboard lessons before advancing to piano the following year. He made his concerto debut at 14 after winning the Christchurch Junior Concerto Competition. Since then he has won the 40th New Zealand National Concerto Competition in 2007, second prize and the Best Classical Sonata Performance Award at the 2008 Kerikeri International Piano Competition, is a multiple recipient of Dame Malvina Major Foundation Arts Excellence Award, and has received support from the Farina Thompson Charitable Trust, the Anne Reid Memorial Trust, Kiwi Music and Keith Laugesen scholarships.

After receiving his Bachelor of Music in piano performance and composition with Péter Nagy and Gao Ping at Canterbury University in 2009, Tony moved to Europe where he completed his Master of Music under Gilead Mishory and Andreas Immer at the Hochschule für Musik in Freiburg, Germany. In 2015 he graduated from Konzertexamen (Soloist Diploma) with Distinction. He studied part-time with Balázs Szokolay at the Liszt Academy in Budapest, and has benefited immensely in recent years from the mentorship of Chilean pianist, Edith Fischer.

"Lin is no slouch when it comes to letting his fingers do the talking. From first to last, his performance is gripping and involving. Although nominally a one-movement work, the Humoreske comprises many highly contrasted parts; I can well imagine some pianists making it sound rather "bitty". In explaining its architecture, Lin implicitly explains his approach. Fair enough: he uses the word "mosaic", but he also goes on to discuss the "cement" that binds the work into a whole - and this is what makes this performance so striking. Lin vividly draws all the distinct characters and moods, whilst relating them to the overall musical "arch", consistently conveying an underlying sense of continuity even where a transition is startlingly abrupt. Thus has Lin presented to me a piano work of which I was scarcely even aware - and made me fall in love with it. And believe me, that is no mean achievement." MusicWeb recommended