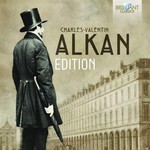 A welcome and much‐needed tribute to the most neglected Genius of the 19th century: Charles‐Valentin Alkan.

Charles‐Valentin Alkan was one of the most important pianists and pianocomposers of the 19th century, although he lived the largest part of his life in obscurity and seclusion. He was a close friend of Chopin (they were neighbours in Paris) and he was the only pianist in whose presence the great Franz Liszt was nervous to play.

Alkan's works reveal a strikingly original genius, they range from the smallest miniatures to the most colossal creations, from the bizarre to the grandiose, from the intimate to the heroic.

This Edition includes the major piano works: both cycles Studies in all the minor and major keys (Op. 39 and 35), the Grande Sonata, the Concerti da Camera, organ works and chamber music.

Played (among others) by today's best Alkan interpreters: Giovanni Bellucci, Mark Viner and above all Vincenzo Maltempo, who received several glowing 5‐star reviews for his performances: "exhilarating, a revelation!" (Guardian, selected among the 10 best CD's of 2012), "his playing flashes with summer lightning" (Gramophone), "Maltempo puts his phenomenal technique at the service of his poetic vision"(Piano News), "with this passionate performance Maltempo confirms his place in the restricted circle of Alkan's best performers" (5 star, Diapason) and many more.

"Two major pluses are the excellent contextual essay and the budget price. It's a steal." BBC Music

"With all his eccentric, uneven and often bizarre creations, there can be no doubt that Alkan is one of the very greatest and most important writers of music for the keyboard…To whichever disc you turn, Alkan continually confounds your expectations…gives us the finest account ever committed to disc of the 12 major-key studies" Gramophone

"No orchestra required... the final movement of Alkan's Symphony for solo piano with pianist Vincenzo Maltempo making an impressive job of those extreme demands. And if you have an Alkan shaped gap on your shelves this Alkan Edition from Brilliant Classics should fill it very nicely." Record Review