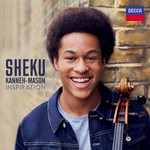 Sheku Kanneh-Mason wowed a global audience with his Royal Wedding performance - it was an extraordinary day for the teenage cellist when his sensational performance at the Royal Wedding stunned honoured guests at the ceremony and a billion more watching around the world. BBC Young Musician of the Year in 2016, Sheku pays tribute to his mentors and heroes on his thrilling debut album, Inspiration.

'Inspiration' reflects Sheku's own inspirations and influences, featuring a broad range of music from Bob Marley and Jacqueline du Pre to Shostakovich, including some of Sheku's own arrangements.

The album includes Shostakovich Cello Concerto No.1, the concerto Sheku performed in the BBCYM final.

"The images shout urban cool, although there's nothing cool or gritty about the sounds produced from his Amati cello of 1610. They're always heartfelt, often as yielding as softened butter, and they shine out of every track...even at the start of his career, nothing masks the authority or technical finesse of his playing...Above all, Kanneh-Mason's playing radiates love of life, commitment and hope." The Times

"The playing here, disarmingly gentle yet tonally seductive, has a songful use of vibrato that recalls the expressive manners of Pierre Fournier and du Pré herself…A most rewarding CD then, sure evidence that we should henceforth be on the lookout for any performances, recorded or live, that involve Sheku Kanneh-Mason." - Gramophone

"we arrive at the 'meat in the sandwich' with Shostakovich's Cello concerto No.1 which performance knocked the socks off both audience and judges two years ago enabling him to heft the trophy of this prestigious competition. I have heard many interpretations of this wonderful work which I never tire of listening to and I find new things in it to admire and revel in on each hearing. The overarching impression in Sheku's rendition is his real love for it and that comes through with each and every note." MusicWeb