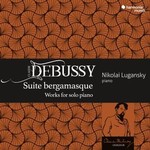 A century after his death on 25 March 1918, many harmonia mundi artists are eager to pay tribute to Claude Debussy, the magician of melody and timbre, the great 'colourist' and father of modern music. After Rachmaninoff's Preludes, Nikolai Lugansky wanted to present a finely nuanced portrait of this composer so fond of travelling! Whether it ranges over time (Hommage à Haydn) or the most vividly imagined open spaces, this freely composed programme is concerned above all with light and colour, in works we can never tire of.

"Lugansky finds ways to ravish the ear without ever letting us settle into monotony…Beneath the shimmering surface colours, Lugansky is alive to structural clarity without ever becoming impersonal or matter-of-fact…and given the nonchalant simplicity he brings to the most complex harmonies and textures, he can stand comparison with Gieseking." Gramophone

"The sequence on disc makes for a varied programme, mixing the familiar with the less so - nowhere more than in the Suite bergamasque, and its ubiquitous third movement, 'Clair de lune'. It is strongly played, bordered by lovely accounts of Deux Arabesques and La plus que lente ('The most slow'), the whole framed by L'isle joyeuse and Images Book II." International Piano