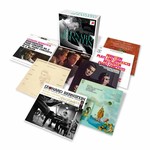 Celebrating Leonard Bernstein, one of the 20th century's most influential musicians

His complete recordings as pianist for RCA Victor and Columbia Masterworks on 11 CDs, remastered from the original analogue tapes using 24 bit / 192 kHz technology

Includes his lifelong concerto showpieces as well as legendary collaborations with the Juilliard String Quartet, Jennie Tourel and Dietrich Fischer-Dieskau

Sony Classical celebrates the 2018 centenary of Leonard Bernstein - one of the 20th century's most celebrated, multi-faceted and influential musicians - with a box set devoted to his complete RCA Victor and Columbia Masterworks recordings as pianist.

All recordings in this 11 CDs original jacket collection have been newly remastered from the original analogue tapes using 24 bit / 192 kHz technology. It is a fitting tribute to the man whom Arthur Rubinstein called "the greatest pianist among conductors, the greatest conductor among composers, and the greatest composer among pianists."

The impact of Bernstein as conductor, composer, educator and inspirational figure in the worlds of the concert hall and musical theatre tends to overshadow his considerable prowess as a piano virtuoso. Yet he always considered the piano his first love, and often led concertos from the keyboard, collaborated in chamber music projects, and accompanied singers whom he admired. Bernstein took to the piano from an early age, studying with a variety of teachers, including his future secretary Helen Coates, although his keyboard gifts fully matured at the Curtis Institute of Music, where he studied with the redoubtable Isabelle Vengerova.

Bernstein's youthful piano recordings for RCA Victor include his own Seven Anniversaries, Ravel's Concerto in G major, a classic reading of the Piano Sonata by his friend and mentor Aaron Copland, and his whimsical song cycle I Hate Music with mezzo-soprano Blanche Thebom. Most of the works for piano and orchestra that Bernstein recorded for Columbia as pianist/conductor were his lifelong showpieces: the Ravel, Mozart's K 450, K 453 and K 503 Concertos, Beethoven's Concerto No. 1, Shostakovich's Piano Concerto No. 2, and Gershwin's Rhapsody in Blue.

Bernstein was justly proud of his Mozart and Schumann collaborations with the Juilliard Quartet, while his long friendship with mezzo-soprano Jennie Tourel yielded many memorable recordings that include Mussorgsky's Songs and Dances of Death, Bernstein's own songs, plus a document of their March 2nd 1969 Carnegie Hall concert. This collection also includes the long-unavailable performance of Mahler's Des Knaben Wunderhorn in the piano version with mezzo-soprano Christa Ludwig and bass-baritone Walter Berry live in Vienna, plus Ludwig's Brahms lieder recital, and a Mahler program with baritone Dietrich Fischer Dieskau.