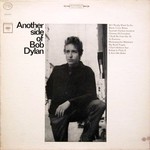 Bob Dylan
Another Side Of Bob Dylan (Gold Series)

On this album it was clear that Dylan was becoming bored with straight folk, although his music was still acoustic. His left-thinking devotees began to raise an eyebrow at subtle lyrical shifts, yet this album was to be raided time and again--particularly by the Byrds--in 1965's folk rock boom. There is much free-spirited music, as if Dylan was somehow aware of the acceptance that was around the corner, and it has been noted that here were the first signs of his trademark vocal style so prevalent through the rest of the '60s. Take your pick: most of the offerings are striking. "My Back Pages," "All I Really Want To Do," "It Ain't Me Babe," and even a last nod to protest, "The Chimes Of Freedom." How can one man have been so prolific?