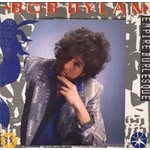 One album removed from his so-called "Christian" period, EMPIRE BURLESQUE foreshadowed Bob Dylan's studio modus operandi for the rest of the 1980s. It forsakes cohesive lyrical and sonic visions for the chance to be all things to all Dylan fans, many of whom proclaimed it as his greatest work since BLOOD ON THE TRACKS; thus, grumpy apocalyptic proclamations, statements of absolute faith (physical or spiritual?) and credos of self-awareness all get equal space. Yet, even as hip-hop producer Arthur Baker's heavily glazed mix makes all these songs digitally shine, the overall feel is of a songwriter committing every thought hastily to tape, lest the thought change shape.

And as these thoughts come pouring out of Dylan's head, the choir-like background vocals (some combination of female singers appears on over half the album's tracks) add a dimension of otherworldly testimony to his words. It seemed that, having found the righteousness of The Word, the bard of modern songwriting was now investing all his recordings with such zero-sum fervor.

1. Tight Connection To My Heart (Has Anybody Seen My Love)
2. Seeing The Real You At Last
3. I'll Remember You
4. Clean Cut Kid
5. Never Gonna Be The Same Again
6. Trust Yourself
7. Emotionally Yours
8. When The Night Comes Falling From The Sky
9. Something's Burning, Baby
10. Dark Eyes