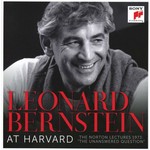 "Everything I do is in one way or another teaching," Leonard Bernstein (Harvard class of 1939) once told an interviewer. In 1971, he was invited by his alma mater to become the university's Charles Eliot Norton Professor of Poetry for the next academic year. The prestigious appointment - previously awarded to Stravinsky, Hindemith and Copland as well as to writers including T.S. Eliot, Robert Frost and E.E. Cummings - required him to deliver a series of six public lectures. The lectures were each given twice, first to the audience in Harvard Square, and afterwards before a small group of listeners at Boston's WGBH-TV, for broadcast by PBS in the US and by the BBC in the UK. Harvard University Press also published them as a book, but Bernstein insisted that they "were written, not to be read, but listened to." Originally released by Columbia Masterworks in 6 LP sets in 1974, this 13 CD reissue on the 100th anniversary of his birth would surely have delighted America's foremost teacher of music.

Leonard Bernstein at Harvard, The Norton Lectures 1973: "The Unanswered Question"

in six volumes on 13 CDs

The complete lecture series on 13 CDs in English