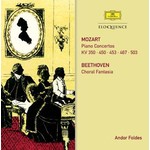 A first international CD release of four concertos from a master interpreter of Mozart. Describing his experience as a youth in Hungary hearing Bruno Walter play and conduct a Mozart concerto, the Hungarian pianist Andor Foldes stated that all in attendance 'were happy, so obviously happy, in the service of a higher power - Mozart's spirit'. His own fidelity to the spirit as well as the letter of music from the Classical era was happily captured on record over the best part of two decades by Deutsche Grammophon.

The pianist's 'craftsman-like approach' to Beethoven was warmly appreciated in Gramophone (March 2018) by Rob Cowan, reviewing two Eloquence albums of sonatas and variations (482 7053, 482 5854), who noted how Foldes seems 'absolutely at home in the recording studio… His playing is a pleasure to listen to on its own terms, rather like enjoying the precise workings of a meticulously engineered watch movement.'

'The solo playing, the singing and the orchestral playing are all in the highest degree sensitive, and they are all given every chance by a first-class recording. In particular, the piano comes off well.' Gramophone, April 1956 (Beethoven)
'Among the better recordings of these masterworks… [Foldes] is favoured with excellent orchestral support and generally first-rate recording.' High Fidelity, July 1958 (Concertos K453, K467)