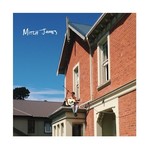 Mitch James' journey has taken him from busking on the streets of Europe, to topping charts; performing to sold-out crowds and now, his debut full-length album.

Even before the release of the upcoming record, the Kiwi singer-songwriter had become one of NZ's largest streamed artists - surpassing 30 million streams on Spotify

with singles such as 'No Fixed Abode' (certified gold in Sweden), 'Move On' and 'All The Ways To Say Goodbye,' all earning James a place in the hearts of fans around the world.
Recorded at Neil Finn's legendary Roundhead Studios, the world-class album showcases a maturity and growth in James' song writing abilities. The honest and emotive
collection of songs (written in New Zealand, Australia, the UK and Sweden) reflect Mitch's journey through young-adulthood exploring love, loss and life.

"There are a whole range of emotions, feelings and songs on this record. There's everything from an up-tempo full-band summer pop tune, to a piano love ballad."

The album also saw Mitch seeking out some of New Zealand's most well-known musicians, Ji Fraser and Eli Paewai from Six60, who make their production debuts on this
record.

"I needed a producer and I was looking all over internet for who would be a good fit. I ended up hanging out with the boys from Six60 and writing a song with Ji
and Eli and then I had a light bulb moment. I knew they wanted to foray into the producing world and I had always loved and respected their music."

The record is truly the culmination of all that's been before for James, who cleaned cars to save enough for a one-way ticket to London (having never played a live
gig) and spent the next couple of years gigging around Europe with barely enough to pay for food or a bed at night.

"I played 230 gigs, busked more than 100 times. But I also slept on the street for eight weeks, was robbed twice, beaten up once, and witnessed a stabbing."

"All the lyrics mean a lot to me, this is all real s*** that's happened to me, or to people around me. It's about me chronicling my own journey but
also putting stories into a broader sense so that other people will also understand them."

James' big break then came when a video he'd uploaded to Facebook got him signed to Sony Music.
18 months later, Mitch has chalked up a stunning list of accolades including opening 3 NZ stadium shows for mega-star Ed Sheeran, released hits like 'No
Fixed Abode' (#1 on Spotify's Viral Chart), 'Move On', ( #1 NZ airplay) and 'All The Ways To Say Goodbye' (6M streams) been nominated for 'Best Pop Artist'
at the 2017 VNZMAs, performed at some of New Zealand's biggest music events including Bay Dreams and Rhythm and Vines, and carried out a nationwide headline tour in a Kombi van.

Mitch's songs are personal; he writes from the heart and delivers with heart, one of the reasons he is touted as one of Kiwi music's next big success stories.