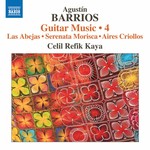 Agustin Barrios Mangore was one of the greatest guitar virtuosi of his time and something of a pioneer in making recordings, which he began as early as 1910. His compositions offer a lexicon of technical and expressive devices for the guitar, from both the South American and European traditions. This penultimate volume in the series offers the scintillating Estudio No. 6, which demonstrates some of the composer's finest artistic characteristics such as poignant treble melodies and a mastery of harmonic progression. Other works include examples of the Paraguayan polka, the Zamba, Creole airs, the Serenata, and many other pieces attesting to Barrios's inexhaustible individuality and variety. Celil Refik Kaya was awarded First Prize at the JoAnn Falletta International Guitar Concerto Competition in 2012 and has since received multiple awards from several prestigious American guitar competitions, as well as the Rising Young Musician of the Year by the Donizetti Classical Music Awards in Istanbul in 2017. Kaya has performed in the most prestigious concert halls and festivals around the US and Turkey, including Carnegie Hall, The Frick Collection Museum, NYCGS, Round Top, Brevard and Ankara International Music Festival, and numerous radio and TV broadcasts.