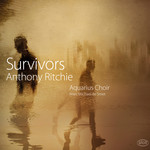 Moving a cappella settings of contemporary poems - music composed by Anthony Ritchie and performed by the superb Aquarius Choir of Belgium under their musical director Marc Michael de Smet.

The CD includes new works such as Salaam and The Survivor as well as older works such as Widow's Songs. The recordings were made in a beautiful church in rural Belgium by this top a cappella choir.

Anthony has composed over 180 compositions during a career that includes a decade of freelance composing, several composer residencies, and 13 years teaching composition at Otago University. Many of his works have been published and recorded, and he has had works performed in many countries abroad, including the UK, Europe, Asia and the US. In 2014, his choral work Salaam was commissioned and premiered by Aquarius in Belgium, who have recently recorded a CD of his choral work. Anthony has had chamber music performed by The Takacs Quartet, The Eggner Trio, and The Yang Quartet, and The BBC Symphony Orchestra has recorded his A Bugle Will Do. His French Overture was performed by The Swedish Chamber Orchestra in 2012, while the CD A Bugle Will Do (Atoll, 2011) was named one of the "CDs of the year" by British reviewer Nick Barnard, on the Music Web International site. He has regularly had works performed overseas at ISCM and ACL festivals.