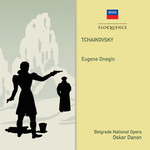 A first release on CD for the first recording in stereo of Tchaikovsky's operatic masterpiece.

With this and six companion issues, Eloquence makes available for the first time on CD the seven complete Russian operas recorded in 1955 by Decca with the company of the Belgrade Opera.

Fresh from a successful tour of Boris Godunov in Switzerland the previous year, the Belgrade Opera in 1955 was keen to make an impression on an international public. At the same time, the Decca company perceived a cost-effective but artistically assured opportunity to expand both its small but rapidly growing stereo catalogue (launched the previous year with Ansermet and the Orchestre de la Suisse Romande) and its opera discography with classics of the Russian opera repertoire which it had previously not been possible to record in the original language.

This Onegin was welcomed with open arms as the first widely available recording in the original Russian, but it was also valued for the idiomatic singing, informed by the company's tradition of Russian opera performance which had been established in the 1930s. Special praise was reserved for the authentically youthful and sympathetically sung portrayal of Tatiana by Valeria Heybalova.

Recorded in both mono and stereo but originally issued only in mono, the stereo versions were finally released in Europe in the 1960s, by which time the Belgrade Opera had acquired an international reputation for excellence. The original stereo tapes are demonstration-quality examples of the renowned early Decca sound. The booklet for this newly remastered release prints both a synopsis and an essay by Peter Quantrill giving full historical context to the Belgrade opera recordings.

Chorus And Orchestra Of The Nat Theatre, Belgrade, Oskar Danton