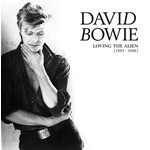 The accompanying 84 page book features rarely seen and previously unpublished photos by photographers including Denis O'Regan, Greg Gorman, Herb Ritts and many others as well as historical press reviews and technical notes about the albums from producers/engineers Nile Rodgers, Hugh Padgham, Mario McNulty and Justin Shirley-Smith.