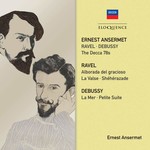 In the words of the composer and critic Virgil Thomson, the unique sonorities of the Orchestre de la Suisse Romande under its founder-director Ernest Ansermet were 'smooth as a seashell, iridescent as fine rain, bright as the taste of a peach'. Ever since its foundation in 1918, the OSR had been coached and trained with relentless attention to detail by the perfectionist Ansermet. As the instrumental voice of its director, the orchestra was honed to deliver faithful and subtly coloured performances, especially of the turn-of-the-century composers such as Debussy and Ravel who were dearest to the conductor's heart.

He enjoyed extensive working relationships with both of these composers, and they regarded him in turn as an ideally exact and sensitive interpreter. Debussy showed Ansermet the manuscript of the Nocturnes, covered in annotations and amendments. 'Which are the right ones?' asked Ansermet. 'I'm not really very sure,' replied Debussy, 'these are possibilities. So take away the score and use the ones you think are right.' In 1921, after listening to Ansermet conduct a performance of La Valse, Ravel immediately wrote to him in a state of excitement: 'You understand La Valse perfectly. I have never been able to obtain such rhythmic suppleness in Paris.'

During 1947-48, Ansermet recorded his first discs of music by Ravel and Debussy. La Mer was a work that the conductor loved above all others: here is the essence of his conducting style, animated by subtle nuances, powerful sound, balanced timbres and poetic imagination. A comparison of the four recordings he made, from 1947 (the one heard here), 1951, 1957 and 1964, reveals how much Ansermet stayed true to himself: the differences between them are minimal, so polished was the vision of Debussy's world he had achieved.

Many of Ansermet's mono-era recordings were made not in Geneva but in Paris, with the Orchestre de la Société des Concerts du Conservatoire, such as La Valse and Shéhérezade. The soloist in Ravel's sensuous, Orientally coloured song cycle was Suzanne Danco, and this is a particular highlight of her slender discography.

'An authoritative and sensitive reading… [notable for] its accuracy and fidelity of nuance.' Gramophone, March 1949 (La Mer)

'Some of the subtlest songs in the modern repertoire, marvellously interpreted and beautifully recorded.' High Fidelity, August 1955 (Shéhérezade)