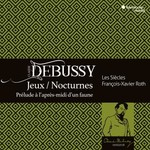 A century after his death on 25 March 1918, many harmonia mundi artists are eager to pay tribute to Claude Debussy, the magician of melody and timbre, the great 'colourist' and father of modern music. With the musicians of Les Siècles, we have the opportunity to discover on period instruments the original colours of such key works as Jeux and the Nocturnes. After his sumptuous recording of Ravel's Daphnis et Chloé, François-Xavier Roth adds a new and splendid achievement to his discography.

"Both works are essentially about desire, and their sensuality is heightened here not only by their juxtaposition but by the dark warmth of Les Siècles' period-instrument sound and the restrained intensity of Roth's interpretations…The women's voices from Les Cris de Paris are exquisitely integrated into the textures rather than seeming detached, as is sometimes the case." Gramophone Editor's Choice Dec 2018

'The musicians act like picture restorers removing the varnish clogging up Old Masters. Colours and textures leap out anew: the dark, slightly husky flute beckoning us into Prélude à l'après-midi d'un faune; the sinewy strings from Nocturnes; the dancing lines and fragments that make up the ballet Jeux...Listening to these superb performances, beautifully shaped and paced by Roth, you newly appreciate Debussy's daring in remodelling the structures and timbres of classical music." Times