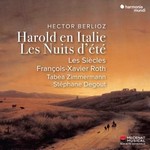 Berlioz the pioneer. A new aesthetic calls for new forms: such is the challenge the composer set for himself in the two works presented here. In Les Nuits d'été, Berlioz pioneered, well before Mahler and Ravel, a song cycle for voice and orchestra. In Harold in Italy, scored for large orchestra and solo viola, he experimented with the symphonic genre. These period-instrument performances by Les Siècles, led by François-Xavier Roth, with violist Tabea Zimmermann, also feature Stéphane Degout in the vocal cycle, heard here in the composer's own version for baritone. File under: out of the ordinary.

"The disc is unmissable, however, for the account of the song cycle by Degout, conceived for four different voice types, but usually sung by a soprano or mezzo. His beauty of tone and immaculate diction make an eloquent alternative to the irreplaceable Régine Crespin with Decca." (The Guardian)

"Les Siècles use woodwind and brass instruments from the middle decades of the 19th century, which, combined with the gut strings, create busy, buoyant textures over which Tabea Zimmermann's solo viola can soar with ease, though there is no lack of tonal weight when the orchestra takes centre stage, as it does increasingly through the course of the work…[Degout's] delivery of these songs is impeccable." (Sunday Times)