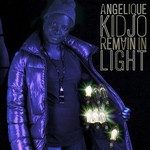 "As 'Remain In Light' was influenced by the music of my continent, I want to pay back the homage and create my own African take on Talking Heads' songs"
- ANGELIQUE KIDJO

This finds the Benin-born artist reclaiming rock for Africa, bringing the Talking Heads' landmark 1980 album full circle. The record is a track-by-track re-imagination of the original, considered to be one of the greatest albums of the '80s and deeply influenced by music from West Africa, notably Fela Kuti's afrobeat. With her version of 'Remain In Light' (out June 8/Kravenworks Records), Angélique celebrates the genius of Talking Heads, Brian Eno and the touchstones that made the original so revered and injects it with her euphoric singing, explosive percussion, horn orchestrations, and select lyrics performed in languages from her home country.

Remain in Light comes bursting out of the gates in a rollicking, irresistible wave of musical joy that only stops when the album is over, leaving the listener in a state of blessed disbelief. - AllMusic

By taking on Remain in Light, Kidjo brings her finely honed Afropop sounds to one of the 1980s' most iconic new wave albums, packing just as much of a punch as the Talking Heads ever did--no small feat for most, but all in an album's work for Angélique Kidjo. - PopMatters

This album is a stunning, multivalent piece of artistry that hits an anxious and weary world like a light-bearing gift. Remain In Light is one of the most fascinating albums in rock history, and Angélique Kidjo may have just released the definitive version. - The Wire