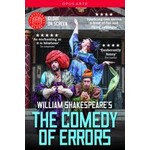 Based on a farce by the Roman playwright Plautus, The Comedy of Errors is the Bard's most madcap comedy - a work full of slapstick humour and rich characterisation that centres around two sets of identical twins accidentally separated at birth. Featuring Renaissance costumes as well as contemporaneous staging, Blanche McIntyre's debut production for the Globe 'sparkles with wit and invention' (WhatsOnStage), with standout performances from Matthew Needham ('who brings a compelling fluency' to the role of Antipholus of Ephesus'), Simon Harrison as his bewildered brother, and Hattie Ladbury who 'elegantly articulates the lofty ideals and passions of his wife Adriana' (Evening Standard).

Reviews
"... more hilarious anarchy than you can shake a fish, cat or identity-confused servant at." (London Theatre Guide)

"The production crackles and fizzes with gags aplenty." (WhatsOn Stage ★★★★)

"... a production of The Comedy of Errors that is as enchanting as it is hilarious." (The Independent ★★★★★)

"I've always thought this to be one of the most beautifully crafted farces ever written. What is refreshing is to find it given a near-perfect production by Blanche McIntyre - one that evokes its Greco-Turkish setting, is exuberantly funny and yet reminds us this is also a play about impending death and the nature of identity." (The Guardian ★★★★)