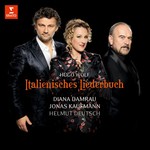 Diana Damrau and Jonas Kaufmann, reigning stars of opera, are also consummate interpreters of song. In early 2018, with master pianist Helmut Deutsch, they performed Hugo Wolf's multi-faceted Italienisches Liederbuch in 12 cities around Europe. "One couldn't ask for more," wrote the Telegraph after their London concert, which took place two days before this live recording was made in the German city of Essen.

"The lyrical intensity of Kaufmann's singing suits Wolf uncommonly well. Nothing sounds forced or over-declamatory: Sterb' ich so hüllt in Blumen meine Glieder, all wonderfully shaded pianissimos, became the emotional fulcrum around which the whole interpretation swung." The Guardian

"..these songs remain very much a German evocation of lightness, of sunlight, of serenades, of a 'love' that is rarely, if ever that of German Romanticism, although it may well be viewed through that prism. All three performers at this Barbican recital understood that, I think: both intuitively and intellectually. At any rate, the tricky balance between Italian 'light', in more than one sense, and German 'prism' seemed almost effortlessly communicated - however much art had been required to convey such an impression." OperaToday

"...close your eyes and this was bliss. Damrau's silver-spun tone crept into the tiniest nooks of nuance and expression in these small songs, now thickly veiled ("Mein Liebster singt am Haus"), now stiletto-sharp ("Schweig' einmal still"), now exquisitely vulgar ("Nein, junger Herr"), now blanched into fragile purity ("Wir haben beide lange Zeit geschwiegen"). If Kaufmann lacked the textural range of a Gerhaher, his tenor lovers had an airy openness to them, and the whole performance had an ease to it we rarely hear from him in the opera house, letting text not tone dominate. His "Sterb' ich, so hullt in Blumen meine Glieder" was a single exhalation of the simplest, most devastating kind." the ArtsDesk