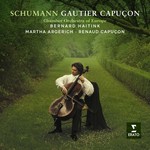 Cellist Gautier Capuçon is the constant presence in this programme of music by Robert Schumann. In the Cello Concerto his partners are Bernard Haitink and the Chamber Orchestra of Europe, and in a selection of chamber works his violinist brother Renaud and the pianist Martha Argerich. "Bernard Haitink is a wonderfully inspiring guide," says Gautier, "and Martha Argerich carries me along on the composer's waves of romanticism and passion."

"Capuçon's impetuosity and thoughtfulness are complemented by Haitink's lifelong engagement with this music...Each of the [chamber] works is played with collective grace and elan by these crème de la crème chamber musicians." Sunday Times

"This, being a wonderful album for cello and Schumann enthusiasts, begins with a sumptuously rich performance of the cello concerto. Gautier Capucon is in fine form balanced perfectly with the Chamber Orchestra of Europe, lead by Haitink. Martha Argerich accompanies beautifully in four chamber works that follow. Highly recommended." Nicolas Butler/Marbecks

"The present performance dates from 12-13 November 2015 and enjoys both the warmly plastic phrasing and glossy sonority from Capucon-who plays a Goffriller c. 1700 instrument-and the estimable clarity that has defined the Haitink style for six decades. Auditors will relish, particularly, the marvelous sense of spacious harmony and repose Capucon and Haitink achieve in the blissful Langsam (Adagio) of this melancholy, through-composed work of Schumann's final surge of creativity. Capucon likens the last movement to a badinerie (a la Bach), and the application of his deft, light touch in tandem with Haitink's brisk tempo effects a pungent wit and resonant elan in the musical moment." AudAud.com

"The chamber works with pianist Martha Argerich which generously fill this album come from performances made at Verbier Festival. The performances are a delight without exception, and very well captured, with Argerich multicolored sound omnipresent throughout." ClassicReview