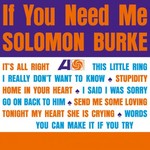 Solomon Burke
If You Need Me (LP)

If You Need Me is an early Solomon Burke album, named after its opening cut. It contains 12 songs he recorded during the period 1959-1962. The single "If You Need Me" became a huge success, originally written and recorded by Wilson Pickett. Each song shows how he's able to reach his audience in an emotional way.