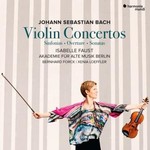 After the double album of the Violin and Harpsichord Sonatas with Kristian Bezuidenhout, a bestseller in 2018, here is the next instalment in a Bach recording adventure that began nine years ago with a set of the Sonatas and Partitas now regarded as a benchmark. Isabelle Faust, Bernhard Forck and his partners at the Akademie für Alte Musik Berlin have explored a multitude of other works by Bach: harpsichord concertos, trio sonatas for organ, instrumental movements from sacred cantatas etc. All are revealed here as direct or indirect relatives of the three monumental Concertos BWV 1041-43. This fascinating achievement is a timely reminder that the master of The Well-Tempered Clavier was also a virtuoso violinist!

"The three monumental concertos on this album are impeccably recorded by Faust, Bernhard Forck and the Akademie für Alte Musik Berlin. It is easily forgotten that Bach was not only a great composer but a virtuoso violinist - and these challenging works are no easy feat for the most talented of musicians. Faust, however, makes it sound effortless." - Classic FM

"This set is a real treat. It's typical of Isabelle Faust that her exploration of Bach's music for violin and orchestra should stretch the boundaries of what we normally expect from such a disc and break new ground in this repertoire...a daring reimagining of his canon that celebrates his violinist's skill and, perhaps most remarkably of all, makes you believe that these reconstructions just might be genuine." MusicWeb Recommended

"Faust's tone is both lean and exquisitely sweet, combined with consistent stylistic elegance which reaches the heights of eloquence in the slow movement of the E major Concerto." BBC Music Concerto Choice June 2019

"Everything here is energy, though the exuberance is of the grounded kind that never gets out of hand…The deeper delight of it all is that you can encounter subtle new aspects in the familiar works…This is a hugely enjoyable celebration of Bach - himself a violinist - which conjures not so much the strict contrapuntal and formal genius as the joyous spirit of the living man." Gramophone Editor's Choice April 2019