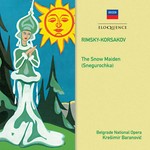 A first release on CD for the first recording in stereo of Rimsky-Korsakov's enchanting springtime love-story. With this and six companion issues, Eloquence makes available for the first time on CD the seven complete

Russian operas recorded in 1955 by Decca with the company of the Belgrade Opera, conducted by Kresimir Baranovic.

Fresh from a successful tour of Boris Godunov in Switzerland the previous year, the Belgrade Opera in 1955 was keen to make an impression on an international public. At the same time, the Decca company perceived a cost-effective but artistically assured opportunity to expand both its small but rapidly growing stereo catalogue and its opera discography with classics of the Russian opera repertoire in the original language.

Composed in 1882, The Snow Maiden was Rimsky-Korsakov's third opera, and he would go on to write another twelve, but even late in life he thought it his finest. It brings nature to life with magical representations of the forest, of frost and spring and even a Shrovetide doll, alongside the villagers who come across the maiden and adopt her. The score is rich in flower songs, shepherds' piping and even a restrained deployment of Wagnerian leitmotifs associated with the Snow Maiden, the trouser-role shepherd Lel and Mizgir, the merchant who is doomed never to take the Snow Maiden as his bride with the final arrival of spring.

Recorded in both mono and stereo but originally issued only in mono, the stereo versions were finally released in the 1960s, by which time the Belgrade Opera had acquired an international reputation for excellence. The original stereo tapes have been remastered for the first time, and they are demonstration-quality examples of the renowned early Decca sound.

The booklet for this newly remastered release prints both a synopsis and an essay by Peter Quantrill giving full historical context to the Belgrade opera recordings.

'The performance conveys a great sense of enjoyment ... Sofiya Jankovic's Snow Maiden is charmingly sung ... she characterises the part very well and is most touching in her death scene ... The smaller parts are all well cast ... Baranovic and his company have secured a very vivid and engaging interpretation of this lovely score.' - Gramophone, February 1957

'The sound is amazingly smooth and clear, and the stereo spread even in those experimental days is really first rate.' - Opera magazine, August 1974