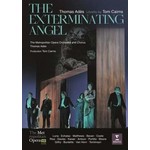 "If you see one opera this year, make it The Exterminating Angel," ran the headline in the New York Times after the US premiere of Thomas Adès' "stunningly inventive" opera based on Luis Buñuel's surreal and satirical 1962 film El ángel exterminador. Like the British composer's score, Tom Cairns' production is both spectacular and surprising. "Adès keeps the listener on edge," wrote Opera magazine, "because one never knows where his dazzling palette of possibilities will take him next."

"You need to see the opera at least twice to get your head around the many guests who arrives at the dinner party from hell and never leave it…The most enjoyable moments are those in which this unwieldy tapestry focuses itself on a single point…And nobody films this stuff as imaginatively as the Met's team led by Gary Halvorsen…[Adès's] presence suggests that is anyone can come near to taming the beast, it's the man who spawned it." Gramophone

"In this recording of the production from the Met in New York you being to wonder whether the guests are on stage or in the audience. Ades, who co-wrote the libretto with his director Tom Cairns, is at one with the Spanish-born filmmaker [Luis Buñuel]: his imprisoned guests are rotten to the core, their privileged lives utterly selfish, masking dark desires and shady ambitions." BBC Music