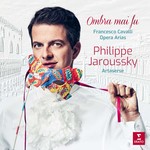 The French countertenor leads Artaserse in a kaleidoscopic survey of the many and varied operas by the seventeenth-century Italian composer, shot through with the spirit of Venetian carnival.

New album of opera arias and symphonies by Francesco Cavalli, the prolific 17th century Venetian composer with 41 operas to his name, who was Handel's predecessor in Hannover. Featuring Erato label mates Emőke Baráth and Marie-Nicole Lemieux , this is the first time Philippe has recorded Cavalli since his guest appearances on Christina Pluhar's album dedicated to Cavalli, L'Amore innamorato.