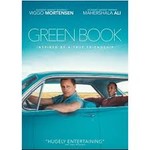 inner of Best Picture at the 2019 Academy Awards, this road comedy-drama stars Viggo Mortensen as an Italian-American bouncer from the Bronx hired to drive a world-class concert pianist (Mahershala Ali, who won an Oscar here and for 2016's Moonlight) on a tour across the 1960s American South.
Confronted with racism and danger along the way, they must set aside their differences while relying on "The Green Book" to guide them to the few establishments that were then safe for African-Americans. Directed by Peter Farrelly (There's Something About Mary).

"Well, it's a handsomely made and watchable picture and there is a real warmth in Ali and Mortensen's per­formances." - Guardian

"Call this actors' duet sentimental and simplistic at your own peril. Green Book may well move you, possibly to tears, at the thought of real social change and kindness (at a time when we need it badly)." - Time Out