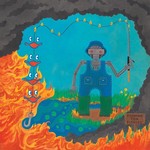 Sit back and strap yourself in as seven-headed Aussie rock beast King Gizzard & The Lizard Wizard return with Fishing for Fishies, perhaps their most perfectly-realised album to date.

The fourteenth album since their 2012 debut, and their first following the release of five vastly different albums in 2017, Fishing for Fishies is a blues-infused blast of sonic boogie that struts and shimmies through several moods and terrains.