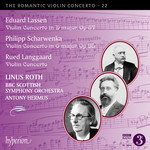 Hyperion's Romantic Violin Concerto series returns with three real rarities, rescuing them from their current neglect. All receive the strongest advocacy from Linus Roth, who plays them like the repertoire standards they may one day become

"Roth plays with almost missionary zeal, he and the BBC Scottish Symphony Orchestra, under Antony Hermus, making a convincing case for these works to be more widely performed." The Observer

"The BBC Scottish Symphony under Antony Hermus, who has made something of a specialty of the romantic literature, plays with great sympathy and sense of colour... this disc offers an out-of-the-way sidelight on the repertoire." MusicWeb

"Take the infectious energy and clear architecture the orchestra brings to the first movement from the off, and then the equally committed lithe, sunny lyricism with which Roth himself then joins the party" The Strad

"Throughout, Linus Roth is the master of his craft, at-one with the three Concertos, and benefiting from alert and sympathetic support from Antony Hermus and the BBC Scottish Symphony Orchestra, all rounded by Andrew Keener's exemplary production, Simon Eadon's first-class sound and an informative booklet note." Five Stars ClassicalSource