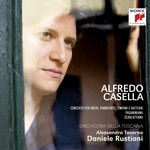 This album, part of a trilogy, was produced in collaboration with the Foundation of the Toscana Regional Orchestra and is dedicated to 20th century Italian history. The first CD with the promising young conductor was released in 2016 and dedicated to the music of Giorgio Federico Ghedini; his second had compositions by Goffredo Petrassi.

This third album with a "Concerto for Strings, Piano, Timpani and Percussion", "Paganinana" and "Scarlatiana" is dedicated to the composer Alfredo Casella (1883-1947). Rustioni conducts the Tuscan Regional Orchestra with Alessandro Taverna on the piano.

Daniele Rustioni, now 35 years old, has gained international recognition in both the opera and symphonic repertoire in recent years. As the musical director of the Opéra National de Lyon, he regularly conducts in the best-known international houses: the Royal Opera House Covent Garden, the Munich and Paris Opera, the Zurich Opera House and La Scala, as well as the opera houses of Turin and Venice. In April 2017 he made his MET debut with "Aida" with great success and was immediately invited for further seasons.