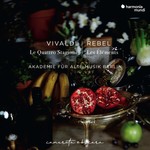 Camerata Obscura is harmonia mundi's first collection aimed at exploring the connection between photography and music. In collaboration with the National School of Photography in Arles, a foursome of young artists was invited to take a fresh look at several key works of the Baroque repertoire, which are being reissued for this occasion.

In the eighteenth century, in both Italy and France, instrumental music was regarded as devoid of all signification and unable to affect the intellect unless it was accompanied by a literary argument (like The Four Seasons) or a choreographic action (like Les Éléments). Long before the symphonic poems of Franz Liszt, Vivaldi and Rebel - both of whom owe their claim on posterity to the works recorded here - showed they could create lively, descriptive instrumental music, admirably meeting the ontological, aesthetic and moral requirements of Enlightenment philosophy

"A Four Seasons on autopilot from these period instrument players was never going to happen and the result is thrillingly visceral. Seiler hasn't set out merely to stand apart from the crowd...she and the Berliners have simply insisted on taking nothing for granted...the sheer flair of this new release dazzles as much as it delights." BBC Music