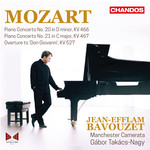 Jean-Efflam Bavouzet's first three volumes of Mozart concertos with the Manchester Camerata and Gábor Takács-Nagy have been received with widespread acclaim, and so it is with some excitement that we release the keenly anticipated fourth instalment in the series.

Composed within just one month in early 1785, these two concertos by Mozart are among the most popular of all his piano concertos. No. 20, KV 466 was his first concerto in a minor key, and its dark and stormy nature contrasts with the light and sunny atmosphere of Concerto No. 21, KV 467.

Like so many of his piano concertos, both works were composed for the Vienna concert season and were given their premiere performances with Mozart at the keyboard.

The two concertos are interspersed on this recording with a vivid performance of the Overture to Don Giovanni, which shares traits with both concertos and further demonstrates the exemplary playing of Manchester Camerata.

"This is altogether a really fine performance…Bavouzet uses the ubiquitous Beethoven cadenzas for K466, while for its C major companion-piece K467 he opts for the examples by Friedrich Gulda, whose recording of the work has been a seminal influence on him…Emulating Gulda, Bavouzet makes the melody float freely while maintaining the throbbing rhythm in the left hand…Takács-Nagy and the Manchester Camerata are thoroughly in tune with Bavouzet, and the recording is first-rate." BBC Music July 2019 Editor's Choice

"Bavouzet and the Manchester Camerata are ideally poised in the fast music, with the conversational interplay between piano and woodwinds displaying the naturalness that is an evident hallmark of this cycle. This series of discs is shaping up to be a serious front-runner in a cycle of works that has never wanted for fine recordings." Gramophone August 2019 Concerto Choice