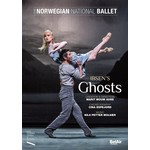 Are we ever honest enough to be unaffected by lies? This is the question asked by Henrik Ibsen's drama Ghosts (Gengangere). Oswald Alving returns from a bohemian existence in Paris to small-town Norway. Encountering people who do not communicate, Oswald responds by becoming ironic and distant. He gradually learns more of the secrets that weigh on his family, as well as those inside himself. His mother, Mrs Alving, welcomes her much-missed son home - and slowly understands what, or whom, he has brought home with him. «Ghosts is a psychological thriller in which the characters learn more and more about their own stories,» says director Marit Moum Aune. «It's about how the unsaid can grow to become insuperable. Immense courage is required to make peace with one's illusions.» Together with the young, critically acclaimed choreographer Cina Espejord, she retells Ibsen's play as a ballet. The pair feel the story is suited to dance because both its inner and outer brutality can be pitted against the power of dance. Ibsen's Ghosts is an evocative production in a modern dance style. Nils Petter Molvær has composed new music, which he performs on-stage together with Jan Bang.