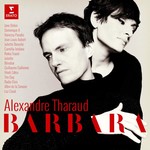 For this double album, pianist Alexandre Tharaud invited a spectacular array of guest performers to join him in paying tribute to the singer-songwriter Barbara, who died 20 years ago, in November 1997. She shares a place of honour in French song with two other 'B's', Jacques Brel and Georges Brassens. Among the featured artists are three world-famous actress-singers Juliette Binoche, Vanessa Paradis and Jane Birkin.

It is 20 years since Barbara died, aged 67, on November 24th 1997. Alexandre Tharaud's idea for this album dates back to the day of her funeral. He, like many other fans, went to the cemetery in Bagneux on the outskirts of Paris. After the crowds and TV cameras had departed, a group of devotees remained at her grave and joined in an impromptu rendition of her songs. "I realised then that Barbara would live on through our voices," says Tharaud. "I was young, but the recording studio was already central to my life. That morning, at Bagneux Cemetery, I vowed to make an album dedicated entirely to the music of Barbara. I needed time, and singers … The guests on this album are not those anonymous mourners, but dear friends I have invited to lend their own unique voices to this tribute."

For Barbara, Tharaud has assembled a rich and imaginative line-up of performers from a variety of generations and diverse artistic and cultural backgrounds. While there is inevitably a Gallic bias among them, many of their names are well known around the globe. Among them are: actress-singers Juliette Binoche, Vanessa Paradis and Jane Birkin; rock star Radio Elvis; singer-songwriters Bénabar, Juliette, Dominique A, Tim Dup, Jean-Louis Aubert and Albin de la Simone; singers Camélia Jordana, Rokia Traoré, Hindi Zahra and Luz Casal; actor-director Guillaume Gallienne; Erato violinist Renaud Capuçon, clarinettist Michel Portal and the Modigliani string quartet. Alexandre Tharaud himself plays on nearly all the tracks - not just piano, but also electronic organ and keyboards, celesta and bells.

"As usual, Tharaud confounds expectations and the two discs here, each of which is actually a self-contained album, approach Barbara's music in very different ways…If the first disc could broadly be described as 'crossover', the second deliberately blurs boundaries between classical and popular music, and the results are fascinating." Gramophone